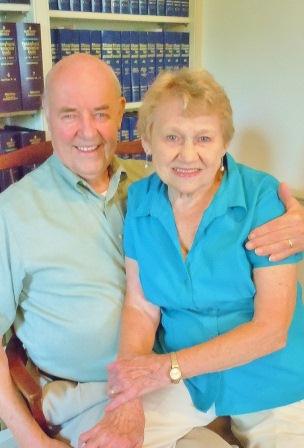 The Baxter’s interests include:

–  Environmental charities that are doing good work, but are not widely known

Their grants focus on services provided to those living in the State of Delaware and in Chester County.

Born 1934 in Philadelphia, Richard was the son of the late Samuel Baxter and the late Norma Winter Baxter.

Richard proudly served his country as an Infantry Captain in the U.S. Army and was honorably discharged in February of 1968.

Richard attended Penn State for his undergraduate degree and later earned his PhD in Chemistry from the University of Pennsylvania. This led him to a 35+ year career at DuPont, where he worked in various fields throughout his tenure.

Richard was an avid sports fan and always had season tickets for the Flyers and the Phillies. He had innate musical talent and in his younger years was skilled at playing both the banjo and the organ. Richard appreciated birding and shared this passion with his wife, Dolores M. Baxter. Birding often led the two to travel many places around the world, which they immensely enjoyed. Dolores and Richard were also long-time members of Al Anon.

Richard was a gregarious presence at Crosslands in Kennett Square and very much enjoyed being involved in the community activities. He was a compassionate and vivacious man and his spirited approach towards life will be greatly missed by all who knew him.

Richard is survived by his two sons, David A. Baxter of Newark, DE and Scott A. Baxter of Columbus, OH; his sister, Linda Downey and her husband, Peter, of New Zealand; and his close friend and companion, Barb Pusey of Kennett Square, PA.

Richard passed away at age 86 on October 8, 2020 at Chester County Hospital. Richard was predeceased by his wife, Dolores M. Baxter, who passed away in May of 2017.

Born in Sunbury, PA, Dolores M. Baster was the daughter of the late Roy and Irene Kerstetter Mull. Dolores was a homemaker, potter and artist. She was a member of Al-Anon and was a volunteer at the Tri-State Bird Rescue and Research in Newark, DE. Dolores enjoyed birding, nature, gardening, and being with her family and friends. She was a long time Phillies and Flyers season ticket holder.

She was the wife of Richard A. Baxter, with whom she shared 58 years of marriage. In addition to her husband, she is survived by two sons, David A. Baxter of Newark, DE and Scott A. Baxter of Columbus, OH; one brother, Dale Mull of Raleigh, NC and one sister, Carol Long of Northumberland, PA.

In memory of Dolores, contributions may be made to the Tri-State Bird Rescue and Research, 170 Possum Hollow Road, Newark, DE 19711.