The Carlson Cultural Trust Fund is dedicated to furthering Charles X. Carlson’s vision of supporting the arts in his community. The Fund accomplishes this by (1) discovering and supporting young emerging artists and (2) by supporting endeavors that hold promise of artistic enrichment of the community.

(1) Student Scholarship: This is a scholarship for any student seeking support for continuing education in the arts. The student must be attending a fine arts college or have a declared major in the fine arts, and has to maintain a 3.0 GPA.

(2) Fine Arts Support: The Carlson Cultural Trust supports any individual, group, or business whose mission is to promote the fine arts in the Lancaster and Chester County area. 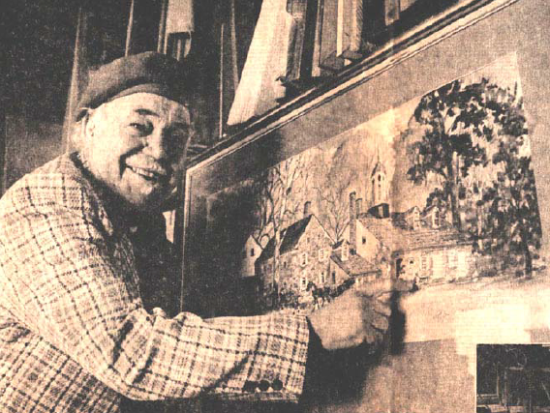 His paintings have been collected around the world and the impact he had on his family, his country, and the world will long outlast him.

Charles X. Carlson was an American Visual Artist born on June 26, 1902 to Finnish immigrant farmers. Carlson began painting at age 7. Due to an adolescent illness, he dropped out of school at 12 and worked multiple jobs the next 10 years of his life. However, even while working, he continued to paint.

Carlson eventually received formal art training at Crane Technical College, the Chicago Art Institute in Illinois, and the National Academy of Design at the Arts Student League in New York City. His studies took him abroad to Belgium and Germany. After all of his education and training, he holds his time at the Chicago Art Institute in highest regard. Carlson was an illustrator, cartoonist, mural painter, and teacher. He painted through the Great Depression, making small pictures and selling a lot of them for small amounts of money.

Carlson was always very business-minded and knew hard work would bring him wealth. Hundreds of his paintings are held around the world in private collections. He is credited for painting murals for Ford, General Motors, and the Historical Museum of New York. He also worked for the War Department’s Bureau of Public Relations during World War II, drawing many publicity items. After the war, he continued to work for the government at the Pentagon, emphasizing the “good neighbor policy.” He painted murals and put together exhibits for numerous countries in North, South, and Central America.

He was an expert in all painting methods, but enjoyed watercolor painting the most because it was the fastest. HE claimed he could paint a scene in 30 minutes with watercolor. He created over 750 paintings during his time supporting the “good neighbor policy.”

After his work for the government, Carlson and his wife Lois settled in Lancaster Pennsylvania in 1947. Carlson continued to teach painting as well as author numerous illustration books.  Carlson was an incredible artist who loved painting and desired to share that love with others. He used painting to support his country during the war and eventually to make the world a better place by instilling art history into third world countries.

His niece and nephews openly share how little time they spent with Carlson, but how much of an impact he had on their lives. Most of them are employed in an artistic-ability requiring occupation, which was influenced by Carlson’s teachings at family gatherings.

Carlson’s paintings are internationally collected and he is recognized for countless achievements including being the first painter to be paid by the National Gallery of Art in our nation’s capital. Most of his murals can still be seen around New York City. Carlson passed away June 15, 1991, at the age of 89 but his paintings and teachings will last throughout many generations to come.