The Moretzsohn Family Foundation was officially created in 2000, though the seeds for its creation were planted long before the signatures brought it into being. The foundation was created out of a lifelong desire of Luiz and Marge Moretzsohn to give back to those less fortunate than themselves in Chester County.
Luiz’ father was from Rio de Janeiro, Brazil and his mother was from Nova Scotia, Canada. Luiz was always interested in local charities and volunteerism. He served on the YMCA board in Berwyn, school board, Paoli Hospital, and more. Marge gives her husband most of the credit in stirring her interest in philanthropy.
Marge grew up with a mother who acted as the initial spark in Marge’s philanthropic goals. Her mother worked at a thrift shop in Bryn Mawr. The idea of giving and getting, learned at an early age for Marge, found its way into becoming a Moretzsohn family Christmas tradition, the “Thrift Shop Christmas Present”. Marge herself spent numerous hours working in thrift shops, most notably the Paoli Auxiliary Thrift Shop.
Luiz and Marge married in 1950. They spent some time living in Baltimore before ultimately moving back to Chester County and raising four children: David, Jeffrey, Beth, and Margaret. 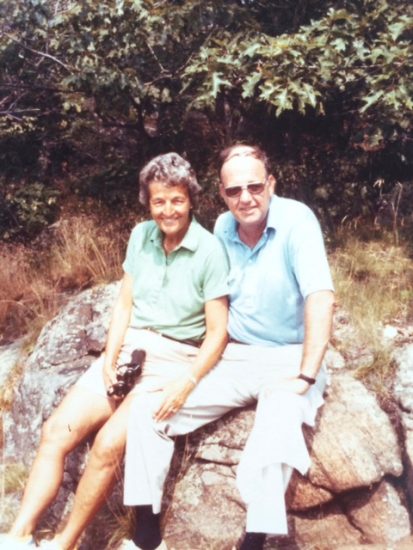 Luiz opened his own business, J&L Building Materials, in Malvern in 1958. The Moretzsohn children and their friends would spend their summers working at J&L Building Materials. In their own ways, Luiz and Marge each contributed significantly to growing Paoli Hospital into the well-respected hospital it is no

w, with him on the board and her in the thrift shop.

Over the years, Luiz and Marge helped other health-related causes, seeing a need in Chester County for more medical services. One such cause was the Community Volunteers in Medicine (CVIM). The Moretzsohn’s knew many of the founding members, having worked with them at Paoli Hospital. CVIM’s medical and dental services to the working poor are provided by doctors who volunteer their expertise to give back to the community. Marge more recently has volunteered in Florida as a docent; works in a community based thrift shop and is an emeritus board member for the Wetlands Institute in Stone Harbor, NJ. Additionally, she has teamed up with four other women in her Church to finance the education of a girl in Honduras.
After Luiz passed in 1994, Marge decided to create the Moretzsohn Family Foundation. “I just like helping less fortunate people. I’ve been very fortunate my whole life.” She found the Chester County Community Foundation through her daughter Beth, who had learned about the Community Foundation from her work with the Fund for Women and Girls. The Moretzsohn Family Foundation thus far has given grants to aid the organizations in Chester County like the Chester County Fund for Women & Girls and Community Volunteers in Medicine. Marge looks forward to working with her family to continue the Moretzsohn’s long-standing philanthropic tradition by using the Fund’s assets to give grants into perpetuity to nonprofit causes in Chester County and beyond.

The sole purpose of this fund shall be to make distributions for charitable purposes to non-profit agencies and other charitable causes as recommended by the Fund Advisors and approved by the Board of the Community Foundation.

You can donate by mailing a check made payable to: