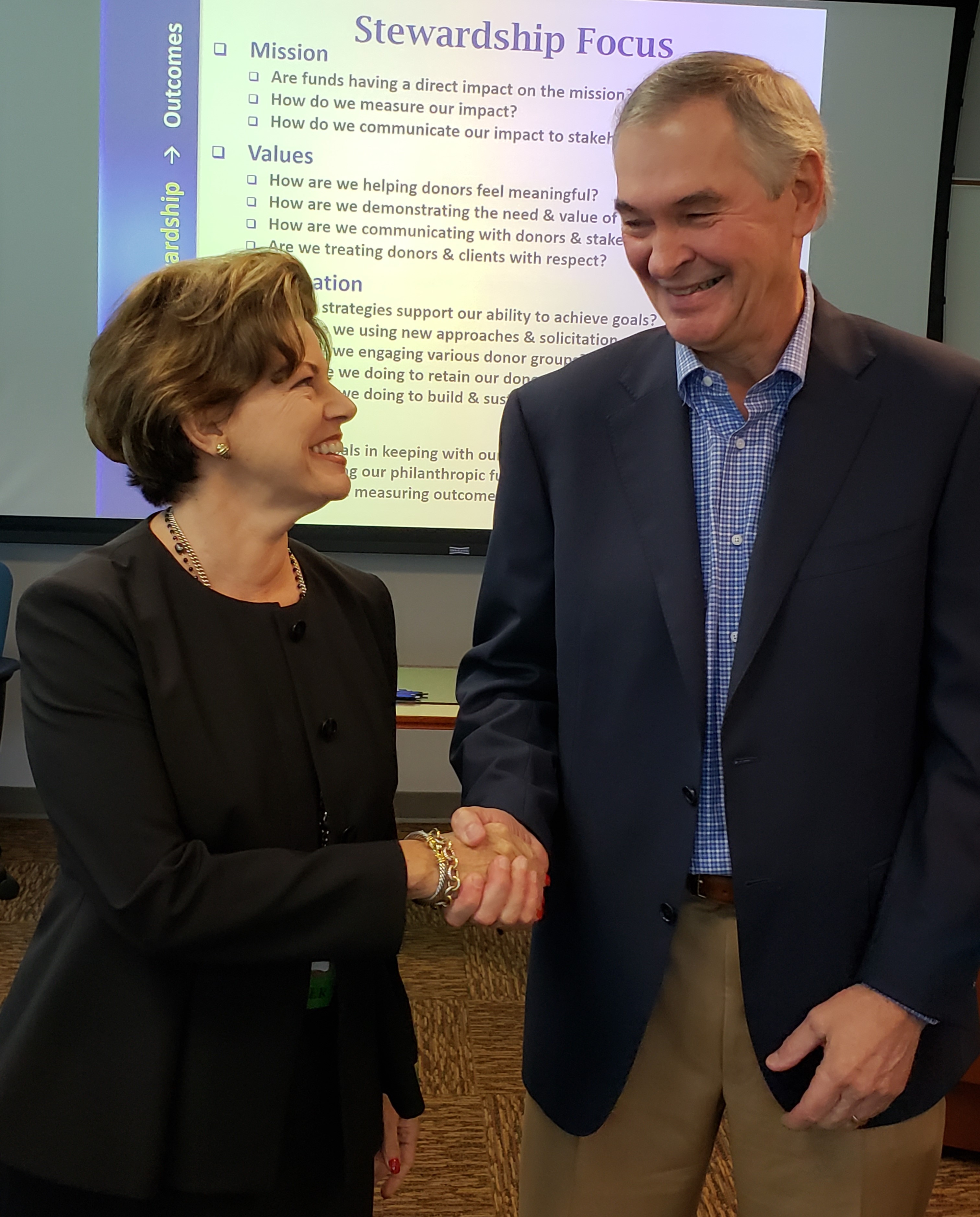 Noel and Bob Stanek are steadfastly devoted to improving the health and well-being of others, with emphasis on matters of health, human services and the alleviation of poverty. Their calling has been interwoven in both their professional careers and community involvement throughout the years.

They both began their careers at Good Samaritan Hospital in Pottsville, PA – Noel as a Registered Nurse and Bob as a Pharmacist.  Building on their clinical backgrounds, they advanced their careers together in the healthcare field.  Noel transitioned from direct patient care to public relations, marketing and development where she established the hospital’s first development program and later served as President.    Bob took on a parallel track beginning as Director of the hospital’s Pharmacy Services and moving on through various management and administrative positions to become Executive Vice President and Chief Operating Officer where he also served as President of the hospital’s Development Corporation, overseeing various venture-based activities.   In 1989, Bob and Noel moved to Norfolk, Virginia where Bob became EVP/COO of DePaul Medical Center and Noel as Vice President of Corporate Services and President of the DePaul Health Foundation.

In 1992, when Bob accepted the position as CEO of Buffalo Mercy Health System, their days of working together came to an end.   Noel then founded Kane Stanek Associates, a consulting firm focused on campaigns, major gift programs and relationship-based development.  They began their life in Chester County in 1997, when Bob joined Catholic Health East, one of the largest Catholic healthcare systems in the United States, where he later served as President and Chief Executive Officer.   During that time, Noel worked with various organizations in Chester County helping them to strengthen their philanthropic efforts and expand their missions, and taught various courses and seminars on campaigns, major gifts, relationship-based development, and board development regionally and nationally.

In 2010, Bob retired from Catholic Health East and became Chairman of the Catholic Health Association for the United States (CHAUSA).  During that time, Noel & Bob co-chaired the national Haiti Rebirth and Renewal Campaign where they raised $10 million to reconstruct a hospital in Port-au-Prince, Haiti.  Bob then expanded into governance and advisory roles on publicly-traded corporations, as well as on a venture capital and private equity basis, where he continues to serve today.

After moving first to Long Beach Island, NJ, and then Windermere, Florida, Noel and Bob realized that retirement simply wasn’t for them.  Returning to Chester County in 2018, Noel and Bob created Stanek Associates LLC where they once again work together to bring their complementary, yet different backgrounds together to help nonprofits realign, focus and increase their mission effectiveness and community impact. To increase their personal impact on the welfare of our communities, they also created the Noel and Robert Stanek Foundation at the Chester County Community Foundation.

With their combined experience, keen understanding, and deep compassion, Noel and Bob Stanek are an unstoppable duo. Their well-spring of devotion improves the health and well-being of people in Chester County and beyond, now and long into the future.

Send a check payable to