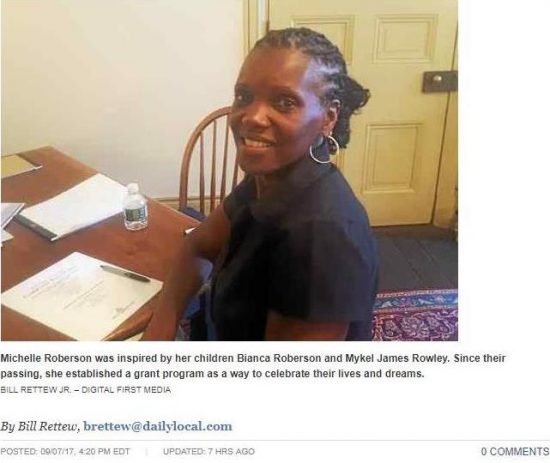 WEST CHESTER >> Michelle Roberson is giving back to the community that gave her so much support.

In memory of Bianca as well as her late son, 22-year-old Mykel James Rowley, Michelle has teamed with the Chester County Community Foundation to establish a charitable grant fund.

Roberson lost her only two children in less than four years. She wants to make sure that they will be remembered and honored, and in their memory, the community will benefit.

Also planned by Roberson are several fundraisers, including a fall 2017 Walk/Run and a “Purple Gala” scheduled for June 2018 to mark Bianca’s death and her favorite color.

“It helps me have a purpose,” Roberson said. “I’m able to give back and help other families dealing with awful tragedies, whether it’s from gun violence, diseases or hate crimes.”

Bianca was killed by a single bullet during a road rage incident on Route 100 in West Goshen Township, police say. A nationwide manhunt led to David Desper, of Trainer, Delaware County, who turned himself in to face charges a couple of days after the shooting.

“They had good lives,” she said. “I gave them the best lives I could.” Her son Mykel lived with Muscular Dystrophy and worked as a tractor-trailer driver. He followed in his father’s footsteps as a trucker. Bianca had dreamed of becoming an FBI agent.

Roberson noted that both died in vehicles. Rowley had a massive heart attack while behind the wheel. “Bianca was so excited about going to school,” Roberson said. “She couldn’t wait. It was a life-long dream.” Rowley was a trucker for about a year. “Mykel had a chance to live out some of his dreams. He did get to do what he wanted to do.”

“I have to stop making sense out of something that doesn’t make sense,” Roberson said. “There is no justice, no good reason.” Roberson will meet with other grieving mothers. “For women just like us – to encourage each other,” she said about simple conversation with mothers faced with a similar situation. “I’m going to rise for Bianca and continue to help other mothers.

“There’s no greater pain than losing a child.”

The loss is huge. “I’m never going to be called mom again,” she said. “I’ll never have the opportunity to be mother of the bride or mother of the groom.” The response from the community was overwhelming. “The outpouring was awesome and from people I didn’t even know,” Roberson said. “Saying thank you isn’t strong enough.

“The outpouring of love and caring and support touched a lot of people’s hearts.”